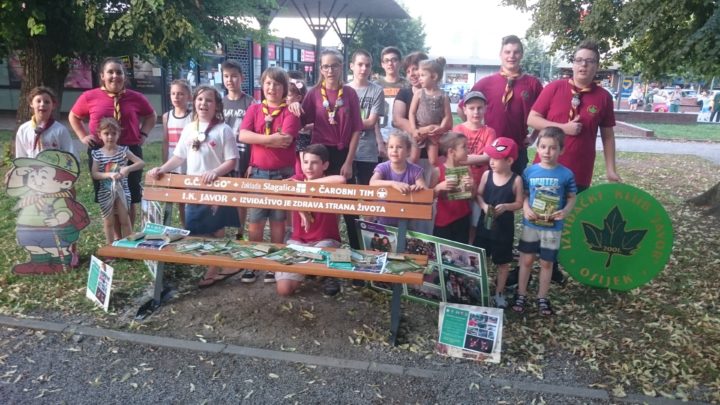 Project: Who if not you?

About: CF Slagalica has 10 year experience in supporting positive social change, and mobilization of community resources in respond to detected needs on the local level. The are primarily focused on promotion of organized community philanthropy and community development (grant-making, capacity building for CSOs, lectures and trainings in primary schools for a “small/young
philanthropists”, Philanthropist’s Club, named funds, annual philanthropy award, community actions, social capital development etc). CF Slagalica is geographically focused on Slavonia (eastern part of Croatia), which is an underdeveloped area, with high rates of ageing population and growing depopulation among other issues.

Challenge: Osijek is urban area with unequally developed districts and opportunities for good quality of citizens’ life, as well as with the decreasing level of social capital. Town’s centre is known for its old and large green public spaces, sport and cultural facilities, while surrounding districts (6) have very few or no safe, inclusive and accessible, green and public spaces, in particular for women and children/youth, seniors and persons with disabilities. Citizens are rarely actively engaged in decision-making processes and there are no public forums and/or similar participatory models enabling and encouraging active civic participation in urban planning and community development in general. Consequently, peripheral town districts do not utilize their public spaces, the level of community-minded citizens is very low, and community interaction in these districts is reduced to a minimum.

Solution: General strategy to respond to this challenge included:

• Enhancing civic engagement in development of safe, inclusive and accessible, green and public spaces for vulnerable groups in 3
town districts in Osijek through strengthening citizens’ knowledge, skills and options for mapping problems and for participatory planning in the local community. Activity took place in 3 town districts for 3 groups of citizens of all ages (up to 30 participants per group). They have also organized workshops about SDG’s – how Global goals can be targeted by local actions in/for most interested and active groups of citizens.
• Opening new public forum between local authority and citizens through public discussions on proposed solutions for improvevement/development of green and public spaces: min 2 events. During the project implementation they have managed to motivate involved districts to host and organize 4 such community meeting to discuss ideas and proposals raised by active citizens/organizations for improvement of neglected public green areas.
• Local fundraising campaign was organized as another tool for promotion of community philanthropy and community development. It will raise any one of three T-types of support (time, treasure, talent).
• CFS team will provide options for on-line fundraising as well. Raised funds will be invested in implementation of proposed improvements of green and public spaces

As a result of the project all planned and expected changes occurred: community philanthropy and community development was promoted, citizens and CSOs were active, took responsibility and fulfilled all tasks on the way of changing specific green public area in their districts, local resources were mobilized in order to bring a positive change. 18 donors invested their time, treasure and talent in setting up a new playground made of recycled material on the neglected green area in Tenja; setting a new bench in Donji grad; repairing already existing equipment set up in the scout park and educational trail improved with a
shed and new solar lighting pillar near the artificial lake in Jug 2 district, and renovation of roof on bungalow of the Fishing Club ,,Linjak” located on a public green area near the drainage of the River Drava which, according to the testimonies of the locals, representatives of the Primary School and the kindergarten Josipovac, are used for the school in nature and as an recreational site for gathering, socializing and other occasions.
Roof restoration, new benches, new playground, shed and solar lighting pillar with no doubts contributes to safer, inclusive and accessible use of public green areas in sub-urban districts of Osijek. All together 85 citizens took part in planning, decision making and/or implementation of above described concrete actions investing 743 volunteer hours in creating more safe, inclusive and accessible public green area in 4 sub-urban districts of Osijek.